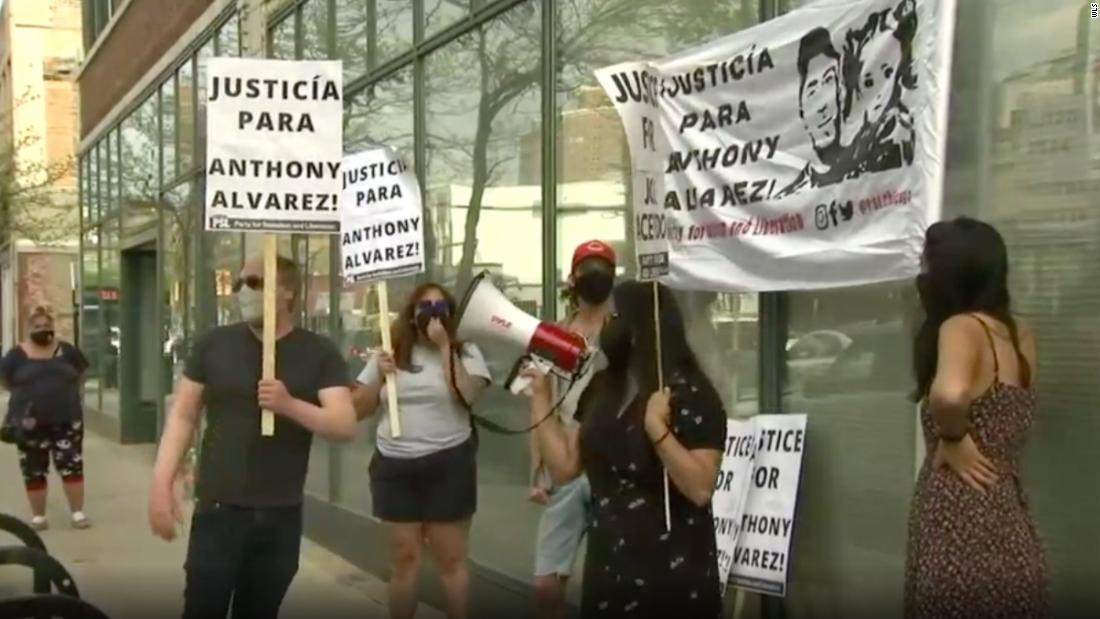 Alvarez was armed with a gun at the time, according to police. And newly released surveillance camera footage showed Alvarez dropping what appeared to be a gun onto the grass nearby as he was shot on March 31.

Body cam footage, released by Chicago’s Civilian Office of Police Accountability (COPA), showed two officers later acknowledging that a handgun was on the grass near Alvarez.

Video from the body cams of responding officers shows them chasing Alvarez by car, and then on foot, in the early morning hours.

When one officer rounds a corner several feet behind Alvarez, in a residential neighborhood in northwest Chicago, Alvarez is seen in body cam footage with his back toward officers.

Alvarez had a gun in his right hand at that point, Chicago Police Chief of Detectives Brendan Deenihan said in a briefing with reporters.

Just two days before the shooting, a Chicago police officer shot and killed 13-year-old Adam Toledo after the boy was seen holding a handgun at the end of a foot chase.

In a joint statement with the Alvarez family on Wednesday, Chicago Mayor Lori Lightfoot said, “The release of these videos will be the beginning of a long process of healing for the family, and for all those who knew and loved Anthony.”

The statement continued: “This tragic event provides further motivation for the expediency for reform to the City’s foot pursuit policies.”

Attorney Todd Pugh, representing the Alvarez family, viewed the video and said afterward on Tuesday night, “It was an absolutely chilling scene and, as his mother indicated already, it has really left us with more questions than answers.”

“I know what I saw, and I saw Chicago police officers shoot their son as he ran away from them,” Pugh added.

Police have not said whether Alvarez was suspected of a crime

In the footage, an officer is heard saying “Drop the gun!” twice and — less than a second later — he fired five times. The shooting is visible from both the officer’s body cam video and a nearby home video surveillance camera.

“Why are you shooting me?” Alvarez yelled from the ground.

“You had a gun!” an officer responded.

At one point, the officer who shot Alvarez told another officer, “Cuff him! Cuff him!” and pulled out handcuffs. The other officer stopped him and said, “No, I’m going to render aid!”

“Stop moving! I’m trying to help you!” said the officer attempting aid Alvarez. “Stay with me! Stay with me man!”

Alvarez was later pronounced dead from multiple gunshot wounds, according to excerpts of a preliminary report from the Cook County medical examiner. Alvarez’s death was declared a homicide, the report said.

Police were attempting to stop and speak with Alvarez, who was “an individual familiar to the officers,” according to COPA.

Police have not said whether Alvarez was suspected of a crime, or what they wanted to speak with him about. It is unclear whether Alvarez knew why he was being chased by police.

In surveillance footage of the latter shooting, Alvarez can be seen walking out of a gas station convenience store when a police car with lights on begins to pursue him.

COPA said the investigation is ongoing but recommended the officer who fired the shots “be relieved of police powers during the pendency of this investigation.”

Chicago Police Superintendent David Brown declined to offer his opinion on the incident until the investigation was complete. The officer has been placed on routine administrative leave, he said.

In the statement with Alvarez’s family, Lightfoot called for calm after the release of video.

Lightfoot urged the public to take the time to look at both the real time and frame by frame footage of the raw video.

“I understand, having investigated many of these shootings, that officers are in many instances called upon to make split second decisions, particularly in instances like this one where there’s a gun,” Lightfoot told reporters before the video was released publicly. “Nonetheless, a traffic accident, a traffic incident should not result in the death of anyone. So, we have more work to do to be sure.”

She declined to comment on specifics of the investigation.

“I will say this, we can’t live in a world where a minor traffic offense results in someone being shot and killed,” she told reporters. “That’s not acceptable to me and it shouldn’t be acceptable to anyone. And again, the shooting involved a foot chase.”

Lightfoot said she has asked that the police department’s foot pursuit policy be revised.

The city foot pursuit policy came under scrutiny last month when Toledo was shot on March 29.

Police said the gun was later recovered from behind the fence where the chase ended. In video, Toledo is seen turning to his left, toward the officer, and what police said was the gun disappearing behind his right side. Toledo began to raise his hands as he faced the officer when the officer fired his weapon.